I finally got to make a new trailer for the game. There’s a lot of changes that I had to make within the game before I could make a polished trailer and if you guys are keeping up with the game development, you can noticed the significant graphic improvements as well as the subtle details added. I’ll link the trailer for you guys to compare! Harvest Island Trailer 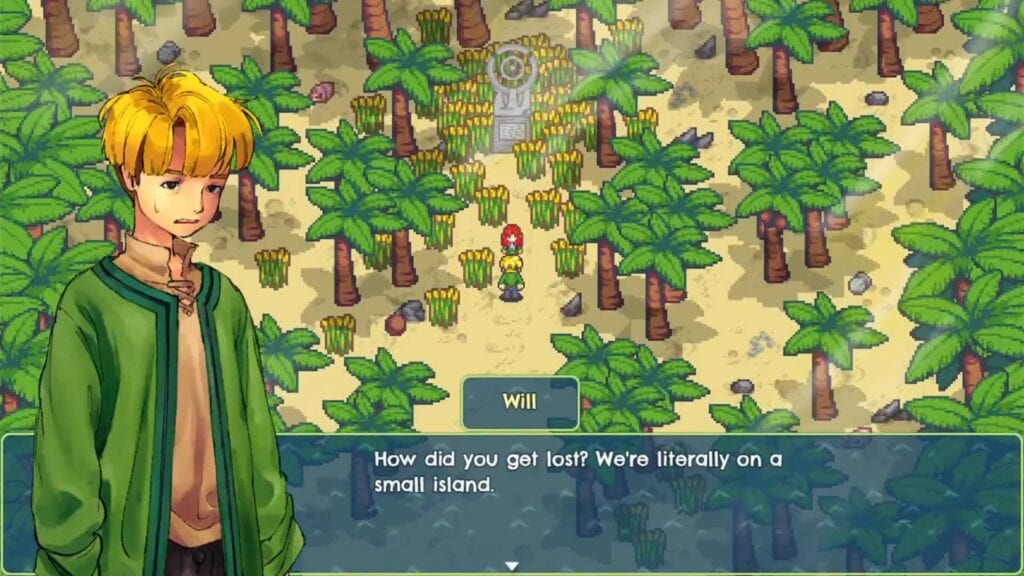 So this game trailer isn’t a gameplay trailer but a story based trailer. I wanted to show the relationship between the two siblings. Will is very adventurous and his sister, Samantha, is annoying to him. In the trailer, you can tell that these two siblings are fighting a lot. It’s normal and like how all siblings are, the older siblings always gets annoyed by the younger siblings. I would know because I have two younger brothers. Sometimes it’s not always that and the siblings get along, but I’m using my own experience to write Will and Samantha’s stories.

As you watch the trailer more, the game’s art is beautiful. It looks bright, colorful, and wholesome. I wanted the game’s direction to go that way because as kids, we view the world innocently. Nothing is bad until we are taught it through our lives.

This helps to build the feeling of the game being cute and wholesome. Even though you see the adventure that Will and Samantha takes, it doesn’t look very scary. It looks like an adventure that isn’t life threatening.

Playing under the waterfall, meeting a sea lion, or just walking around in the forest alone, it feels like there isn’t much of a danger around every corner. Just like how we play outside when we were kids. Everything is adventurous.

When the first minute of the trailer is done, there’s the last few seconds at the end of the trailer if anyone ever watches that far. It’s a vending machine. A very important NPC in the game. It doesn’t talk but I gave it a name. Ochiya. It means tea in Japanese, signifying that this came from Japan.

A  story isn’t a story unless there is some type of conflict within the world, so I added a bit of mystery to the game. It goes along with the general lore of the game but you don’t even need to find this vending machine to even complete the game.

What am I implying? It’s probably not obvious in the trailer because it was designed to capture what I wanted to express in my game: a heartwarming game about siblings. But I am implying that there are multiple endings and that this vending machine plays an important role. The mystery just gets thicker doesn’t it? And so that is the trailer breakdown from me, the developer.

With the release of the new trailer, I decided to release the demo version of the game. I wanted the game to be released late December or early January, but I’ve experienced delays and to make up for my lack of promise, I decided to put out a demo. It won’t be long like the steam fall festival I hosted months ago, but the game will show enough what Harvest Island is about. And if you explore that little 15-30 min demo, you’ll be able to find a secret very early in the game. You may not be able to understand that secret now, but it’s a fun little lore I’ve thrown to you. If you enjoy anime just as much as I do, I think you’ll enjoy it. Even if you can’t find it, it’s already in the trailer haha.

There’s a lot going on in the development in Harvest Island. Where do I even begin. First off, there’s a demo being released on Dec 18th. It’s a short little demo that captures what I want the games to feel. The wholesomeness between the two siblings. And how cute the game is. There won’t be any huge mechanics to show in the game, but a little nice story for you to enjoy. I think you’ll like it a lot. Harvest Island Demo

Aside from that, there’s a new trailer! Wooo. The trailer I had before, months ago, was how the game looked like when I first developed and now with the new trailer out, you can see a huge improvement in the game’s art and over direction. There’s a lot of work that I did to make that happen. I don’t know what else to say but to express that I really like my trailer and how it turned out.

I just contracted a marketing consultant. This is very important because it allows me to learn how to improve my marketing skills which in terms allows me to build a fan base for Harvest Island! I want a fan base so badly lol I love talking to my fans and hearing their opinion and trying to make a game good. I take pride in making games! I don’t do this for money!

So roughly a month ago, I’ve been tweeting everyday and I want to share my results with you! I’ve gained 50 followers tweeting every single day from the previous month! That may not be a lot but it’s an improvement from what I used twitter a long time ago for. I would say, my tweets are engaging but it isn’t reaching out to enough users. I think my hashtags are towards game developers and not towards my audience. I got to figure that out more. Haha.

So, I guess one of my reddit post just got 1k+ and I’m super stoked. There isn’t much comments in the post and I wanted there to be but it looks like the people of reddit like my trailer or respected my hardships I had to endure to make this game. Whichever one, I’m happy.

I guess that’s pretty much it with how my development has been going. Oh and good news, I’ve just got a bit of funding. So that means I can expand the game just a tad more with the art! It’s not much but it’ll help polish the game a bit more.